GOLDEN RETRIEVER CLUB NORTHUMBRIA
The History of GRCN
From time to time certain individuals have had the farsightedness, imagination, insight - call it what you may, for the improvement and advancement in the dog world. We in the north-east of England were lucky enough to have had such a person, this was Patricia Pape (Pat), she saw there was a large gap between Scotland and the Midlands and nothing between the east and west of the country.

We started as a group known as the Tyneside Group of the Northern Golden Retriever Association in January 1976, Pat becoming our Chairman, and Hon. Secretary Jennifer Hay. To raise funds the events which were held, coffee evenings, jumble sales, fancy dress parties, sponsored swims, and quizzes to name but a few. Our first committee meeting was held on the 7th March 1976 where it was proposed to have a teach in, the speaker being Mrs Jean Burnett (Rossbourne), (interestingly the price for this event was 60p members, 80p non-members and half price for children!!! How times have changed). Under Pat’s guidance we went from strength to strength, holding rallies, (show, gundog and obedience) seminars, film evenings, cheese and wine evenings, photographic competitions, Christmas parties and of course shows (Open). We had excellent speakers for our lectures, such as Mary Roslin-Williams (Mansergh Labs) Joan Joshua, Dr. E Rickards and Dr. M Willis. We were also lucky in the early days to have had the help and expertise from people in other breeds.

Having worked so hard towards our goal, we applied to the Kennel Club to have our own club and in 1978 the Golden Retriever Club of Northumbria was born, the late Lord Armstrong of Bamburgh Castle kindly agreed to be our first patron and as everyone knows the castle is featured on all the prize cards etc.. Having admired the way the Golden Retriever Club of Scotland used tartan cloths to cover the tables at their show, I was delighted to find (going to barn dances run by the then Duke of Northumberland’s piper) that Northumberland also had a plaid/tartan, and so this was 'adopted' by the Club. Northumbria has gone on growing, still holding events in all things canine and on the social side. From the very beginning Pat was a firm believer in trying to eradicate the heredity diseases we have in our breed. Eye testings were held and talks/seminars at regular intervals. The late Les Wilkinson gave a lot of help and advice on the working side, starting in 1979 with gundog training classes, most of us were very raw novices, but very willing to learn, and from these beginnings the working side has grown so much that in 1985 we applied to hold our first field trial, this being granted, the working side under the guidance of FT Secretary Jennifer Hay developed enormously.

Of course the icing on the cake for any club must be their first Championship Show, ours being granted for 25th May 1980. We had an entry of 232 dogs (117 dogs - 115 bitches) making a total entry of 425. Judges were Mrs Irene Parsons (Torrdale) - bitches, and Mrs Julia Hebbert (daughter of Muriel Iles and the late Jimmy Iles) - dogs.

In the following years it was a time of growing, learning and expanding, bringing us to 2003 our Silver Jubilee year, with everyone going all out to make it ’Silvery’ and special but I think for many of us 2000 was just that bit extra special, as we held a Millennium Memorial Match to commemorate Pat and Les, Pat for her unstinting work and devotion to the club, and Les (a true gentleman) for his great help in the early years. The Match was held in the Derwent Hotel which is situated in the lovely countryside in County Durham. The judges were the late Marion Dawson (who was for many years secretary and treasurer of the Northern Golden Retriever Association), Mrs Val Burns (Abnals) and Mrs Patsy Hollings (Gunalt). The three ladies, much to their delight, were piped down the stairs into the show room by a Northumbrian piper, thus this started a very enjoyable day, there being many many specials and prizes very kindly donated. One of the main trophies was designed by Margaret Turner of Border Fine Arts; this was all the more appropriate as it was modelled on one of Pat's Goldens. A lovely day, a nostalgic day.

As well as forming Northumbria, Pat had another claim to fame, she was the great grand-daughter of William Rochester Pape who with two other gentlemen promoted and organised the first dog show, this was held in the Corn Exchange, Newcastle upon Tyne, in 1859. The show was for Setters and Pointers (dogs only, no bitches), there being just two classes, with the prizes being Pape’s double-barrelled guns. The judges were a Mr R Brailsford and a Mr J Jobling, (now it does seem strange as the winner of the Setter class was J Brailsford and the winner of the Pointer class was W Jobling!!!) There were 23 Setters and 36 Pointers and some of these were for sale from £10 to £100.

Mr Pape was a famous Tyneside Gunsmith, who as a young man started his own business in Westgate Road in the 1850s and his son James Victor Pape joined the firm on leaving school. Mr Pape was a breeder of Pointers and also a falconer, he had many more strings to his bow, too numerous to mention. Entries for the show came as far afield as Ashton-under-Lyne, Lancaster, Penrith and Huddersfield, as well as the North East - featuring many well know Northumberland names such as Shaftoe, Jobling, Storey, Cowan and Robson. Mr Pape’s affinity with dogs and his keen business sense must have come down the generations to Pat, and through her, Northumbria has this famous link. 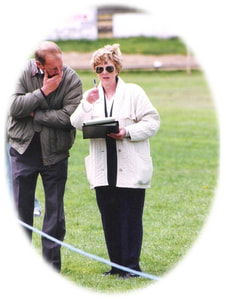